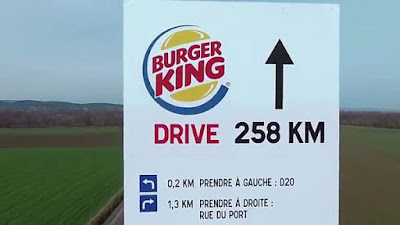 In the burger business or let’s say in the informal restaurant business McDonald’s is the leader with the largest number of outlets. There is always a Mc Donald’s within reach. In this ad Burger King acknowledges Mc Donald’s strength and tries to use it to its advantage; this indeed is a bold thing to do. The impression that this ad attempts to leave in the consumers’ mind is that Burger King is far better than Mc Donald’s and it is worth every effort to go to a Burger King restaurant even if it is distantly located, and even if you need have a light snack at Mc Donald’s (Mc Drive) on the way, the effort is certainly worth it. The ad tries to make you feel that Burger King is a
massive brand and that Mc Donald’s is relatively a small player playing a supporting role.

For the Burger King consumer I feel, the ad strengthens the brand Burger King and for someone like me who has never tasted Burger King, I do feel like trying it out after watching this ad. I do not want to describe the ad, please watch it for yourself here or you could watch it on YouTube by clicking this link: BURGER KING reveals the end of a McDonald's commercial. 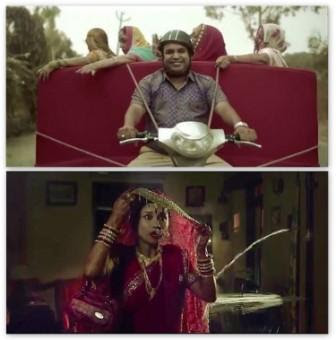 Of late the word ‘jugaad’ has been used in a very positive way, it celebrates the ingenuity of the common Indian of finding solutions with limited resources, many a time such solutions may work out to be cheaper options.

Sulekha has exposed the negative side of ‘jugaad’ in a very interesting way using humour. This campaign tells you how quick fix solutions to any kind of problem do not work in the long run (maybe not even in the short run), one needs help from experts who know their jobs and Sulekha.com will help you connect with such people. The ad shows a young who has a quick fix solution to every kind of problem and he seems to be pretty proud of his abilities, but later his quick fix solution has a disastrous effect.

What I like about the ad is that it feels like a story unfolding before your eyes, I like the way various problematic situations have been thought of and executed. The ad is based on valid consumer insights and I think it stands out in the clutter. People do not always look for quick fix solutions because these are cheaper and good, but also because of sheer lethargy. By turning the concept of ‘jugaad’ on is head Sulekha gives a wake up call. It surely is an interesting and humourous ad with will be remembered. Watch the ad below or watch it on YouTube by clicking this link: Sulekha - Go #AntiJugaad


Eye Spa – Eye-catching ad but they got the wrong doctor 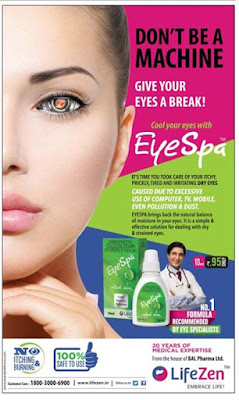 Eye Spa is a new product which has been launched this year and this was probably the first press ad that was released, they have a series of interesting press ads. The main visual in the ad is truly eye-catching and impressive, the copy also explains the product well but why did they have a picture of a doctor with a stethoscope? Why would an eye specialist use a stethoscope? I think they got the doctor wrong.