It is cold press time 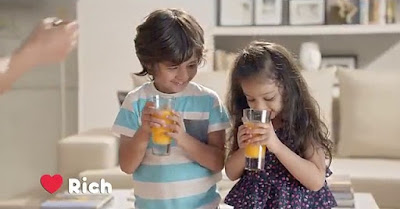 Usha International, a company well-known for its sewing machines, fans and other electrical appliances has launched Usha Nutripress Cold Press Juicer this year. As the name suggests the product uses the cold press process for extracting juices. The message in their advertising campaign is very clear – since the product uses cold process the food is healthier and tastier. The brand name Nutripress itself suggests nutrition. After seeing the ad campaign, my immediate thought was – since Usha Nutripress is cold press juicer, does that mean the other brands of juicers which do not use cold press generate heat? What exactly is cold press?

Recently I happened to notice an article in a newspaper supplement that explained as to why and how cold press juicers help in retaining nutrition of fruits and vegetables, it also explained that other juicers actually generate heat that can destroy much of the nutrition value of fruits and vegetables. If I remember right Usha Nutripress was launched in summer this year and I wonder if it was really a coincidence that the newspaper carried an article on cold process juicers during this time, quite possibly the PR team of a manufacturer of cold press juicers arranged for the article. Was the manufacturer Usha International? I really do not know.

The current ad campaign of Usha Nutripress comprises five TV commercials (TVC) to show that the product can be used in different ways, such as for making spinach juice, carrot juice, orange juice, almond milk and strawberry smoothie. Although I have been seeing these commercials five days a week, initially I did not realize that I was watching five different TVCs, this is despite the fact that there are some differences in each of the TVCs; the reason for this is that these ads are just too similar, they have an identical template so that the look and feel is the same for each TVC; therefore you tend to miss the distinctiveness of each of the TVCs.

The campaign is obviously aimed at the health conscious prospective customer who may want to buy a juicer for the first time or may want to replace her existing juicer. Usha’s proposition is that if you use Usha Nutripress Cold Press juicer, it would be healthier that others in the market. ‘Get more juice out of life’ is what the ads say, the claim made is that you get more juice which is smoother, richer, more nutritious and tastier; but the ads don’t not say how that is possible. The claim is not supported. 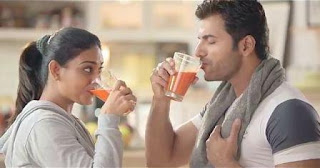 I personally think that having five different ads is not a very good idea, they hardly look distinctively different. The campaign might be successful in achieving the objectives that have been laid down, but I strongly feel that the campaign would have been more impactful if the concept of cold press and how it is better than hot press was explained very clearly in the ad(s). I have mixed feelings about the five TVCs, I do like the clean look which is important for ads related to food, I also like the attractive colours of the fruits and vegetables and their juices that are shown; there is visual appeal. On the negative side I find the ads a bit monotonous and lacking in vitality. YouTube links to the Usha Nutripress Cold Press juicer TVC are given below:

The shop salesman plays an important role in educating the customer and building confidence, advertising can only create awareness and desire; the actual purchase is dependent on the customer being convinced that the product is useful and worth the money spent. It must be remembered that the store salesman is not necessarily loyal to any brand; he only does his job. Apart from advertising, kitchen appliances such as Usha Nutripress Cold Press juicer need to be demonstrated in stores and in exhibitions, this I am sure Usha must be doing. 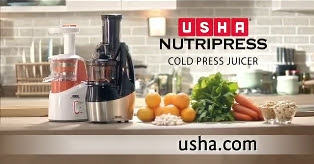 The cold press concept seems to be catching on in other product categories as well; recently I came across an ad for a new product called Iraya Cold Pressed Ayurvedic Oils, let us see how consumers react, will they consider the cold press process to be significantly better? Will they appreciate the benefits of cold press products enough to spend more money? These are question for which I have no answer, so let us see what happens in the market place. 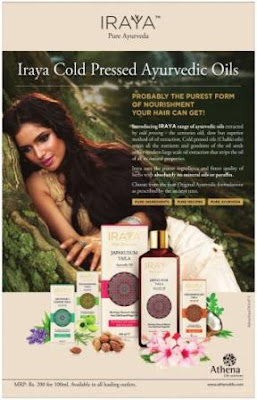