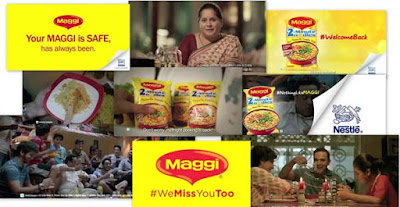 Maggi Noodles has been in the Indian market for close to three decades and was going from strength to strength till on the fateful day of June 5, 2015 Food Safety and Standards Authority of India (FSSAI) ordered Nestlé India Ltd. to withdraw all nine variants of the product from the market because it considered the product to be unsafe and hazardous; lead and monosodium glutamate was found to be above permissible limits, hence unsafe for human consumption. Maggi Noodles was not the only product to be banned, other brands in the category also faced the music. I do not wish to go into the details of this case since this blog; Advertising Opinions is only about advertising and communications, so I will restrict myself to commenting only on how Maggi and its competitors communicated with their consumers before, during and after the ban was lifted. 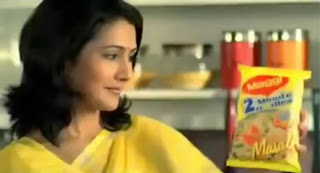 Maggi is the leader in the category of instant noodles with about 65% market share as reported in the media; its closest competitor is Sunfeast Yipee! from ITC and there are others like Horlicks Foodles from GSK Consumer Healthcare, Top Ramen from Indo Nissin Food Ltd, Wai Wai from Nepal based Chaudhary Group and few others.

When Maggi was withdrawn from the market, Nestlé India had to destroy stocks worth Rs. 320 crore and the company also made a loss that quarter. However this was not the only problem the brand faced, the biggest problem was the terrible beating its reputation took. It was the first time customers especially mothers who fed Maggi to their children became suspicious with regard to the safety of the product. Nestlé India had two challenges; one, how to keep brand Maggi alive during the ban; two, how to win back the reputation of the brand and inspire confidence in the minds of the consumers when the ban is lifted; the Maggi Noodles tagline – Taste Bhi Health Bhi sounded like a cruel joke.

Maggi's competitors' TVCs resemble those of Maggi's
Maggi 2-minute Noodle (M2MN) was the first variant to be introduced by Nestlé India, small children were targeted and the mother played a important role of the provider and influencer; this was later followed by other variants targeting other demographic segments. A whole generation has grown up watching M2MN commercials; the imagery of the mother taking pleasure in removing the noodles from the pack, breaking them into two and tossing them in hot water, adding vegetables, adding the taste maker and serving the Maggi Noodle dish to the children who enjoy eating it, is etched in memory. Maggi’s competitors seemed to have used most of the elements of the Maggi Noodles TVCs in the scripts of their own TV commercials (TVC), this made their TVCs look so much like the Maggi TVCs. Even the mother wears a yellow costume as in the Maggi Noodle TVCs; in the Yipee! TVCs where the mother is not shown wearing yellow her son wears yellow instead. See below: 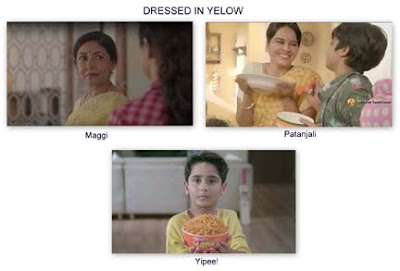 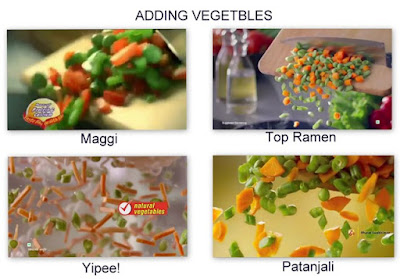 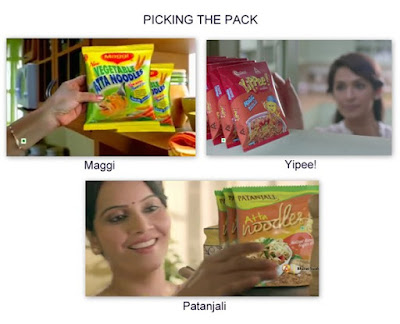 Maggi’s competitors have tried to be different though; Yipee! Noodles comes in a round shape and you are told to cook it ‘as a whole’ and ‘serve it in a bowl’. Patanjali Noodles claims to use atta in their noodles which it tries to show as a USP, but this proposition is hardly unique considering the fact that Maggi has been selling the atta noodle variant for a long time. The biggest advantage that Patanjali Noodles has is the fact that Baba Ramdev is behind it. Patanjali Ayurved is also making efforts to instill swadeshi pride and remove the MNC mindset.
Maggi chooses a different path
While competitors are busy making their ads that resemble those of Maggi’s, it is interesting to see that Maggi has chosen a different path. When Maggi Noodles was withdrawn from the market last year one did not know for how long it would have to stay away from the market; it was imperative that the brand and the values associated with it be kept alive in the minds of the consumers, the loyal Maggi Noodle consumers also wished to know what was exactly happening, is Maggi coming back on the shop shelves? Nestlé India believed that it must engage with the consumers to inspire confidence. The company had to also consider the fact that competing products were waiting to take advantage of the situation. A series of specially made short films were posted on Maggi’s YouTube channel. Yes, these were short films and not advertising films. These films had a common theme, that of missing Maggi. Each of these films has a young person who explains how he misses Maggi; the products pack is not shown, instead at the end of each film the Maggi logo appears with the line “We miss you too”. 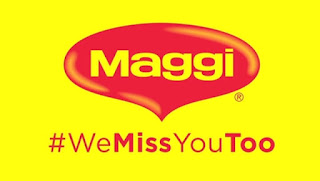 Points to be noted are: these films were not meant for television and I think the company acted wisely because television advertising would have required a huge amount of money which it could ill afford at a time when they were not allowed to sell the product; the films do not feature small kids and mother, they are based on the fact that over the years Maggi has grown to have a much wider appeal, the consumer base is not restricted to children only. Apart from being a quick snack or mini-meal for kids it became a convenience food for young people who stay alone, away from their families and also for males who do not how to cook. I would not like to go into the details of each film, since they are pretty self-explanatory. Here are the links:

These films give an impression that Maggi does not really have a substitute, so when Maggi is not available you are left helpless.


Competitors get into action
While Nestlé India was busy trying to see that consumer loyalty towards Maggi Noodles does not get eroded, Sunfeast Yipee! and Top Ramen were aggressively promoted as alternate to Maggi. In order to assure consumers that Sunfeast Yipee! is safe ITC provided illustrated handouts to retailers and distributors and were asked to show the same to customers, these were meant to assure and educate the consumer about the safety aspect of the product. Their TVCs reflected the same. Take for example this Yipee! Tasty and Healthy TVC, it says that Yipee! Noodles are not only tasty but also ‘Absolutely Safe’, there are actual shots of their ‘world class’ factories and R and D centre in an effort to make their claim credible to the consumers.


ITC has also uploaded a two and a half minute video – Where are Yipee! Noodles Tested, this film tells about where and how Yipee! noodles are tested, it shows how committed the company is to maintaining high quality. The essential message in the Right Choice (Vox Pop) TVC is that for today’s kids Yipee! is the favourite brand of instant noodles, indirectly saying that Maggi is no longer the choice for kids, it is forgotten. ITC had also launched a TVC called ‘You Ask We Answer’, this commercial encourages people to ask whatever questions they want regarding quality of Yipee! Noodles. 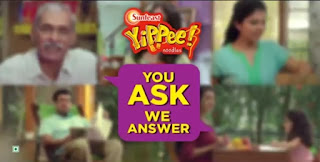 The Top Ramen noodles TVC announces that it is back, as though everyone was eagerly waiting for it to be back. The TVC also reminds the viewers that instant noodles were invented by them (Nissin); the TVC also assures of ‘Japanese Quality’, I do not know how many consumers will be impressed by this, what is Japanese quality to Indian consumers anyway?

So we see that when Maggi was out of the market its competitors did try to plug in the gap but did not really have any strong competitive advantage to talk about, in many ways their ads resemble those of Maggi’s. Now what did Maggi do when it was back in the market?

Maggi gets into action 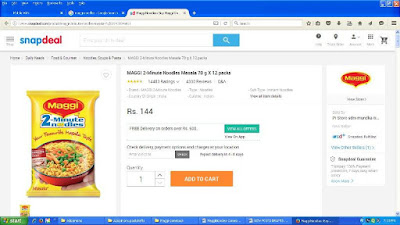 A series of television commercials (TVCs) were released when Maggi returned to the shop shelves, Maggi also tied up with Snapdeal for online business. These ads celebrate the return of Maggi. The general idea that is conveyed in these ads is – Maggi is back, so the good times are back again; the campaign tries to make consumers feel good by appealing to emotions. While the overall message of this comeback campaign is about feeling good, the message of each individual ad is specifically based on consumer insights. To give some examples; in the Hostel TVC a few working men visit their old college hostel room, enjoy Maggi Noodles with the young students there and relive their student lives, a friendly atmosphere is created in this ad; there is another ad showing a kitchen of a girls’ hostel, three girls take the liberty of cooking Maggi noodles in this kitchen, they are very happy about it, much to the surprise and annoyance of the cook; there is one TVC featuring a teenage boy and a girl (siblings) and their mother, the mother prepares and feeds them Maggi Noodles like she did when they were little kids; in the TVC which shows a mother, daughter and the father who again tries his hand in preparing Maggi Noodles like he did when he was much younger; the Dhaba TVC is a bit different, the dhaba owner is in a celebratory mood now that Maggi is back like the good old times.

There are more such TVCs and each of them has an emotional appeal and shows togetherness, it could be a family, friends or roommates coming together, everyone is happy that Maggi is back and they enjoy eating it together. Links to these TVCs are given below:


There is one more TVC called 'Balcony' where a young mother is shown talking to the camera, this ad emphasizes that Maggi is absolutely safe to eat, here is the link. Right now I am not aware if there are more TVCs like these.

What is noteworthy is that Nestlé India did not make use of celebrity endorsement for Maggi’s comeback advertising campaign but instead used valuable consumer insights, which make the communication more meaningful. I am eager to see what Maggi does next and in what way will Maggi’s competitors react its comeback ad campaign.
Posted by Aroop Bose at 5:26 PM