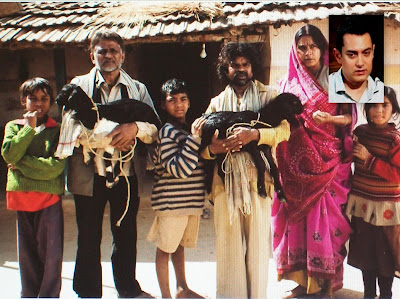 There is no doubt about the fact that film marketing has reached new heights in recent times, but undoubtedly it is Aamir Khan who raises the bar every time when it comes to promoting his films. His promotion of Lagaan was quite innovative. Even after the film was declared a hit he organized cricket matches with the Lagaan team.

For Peepli Live the approach was totally different. When he first started promoting the film there were reports in the press of how he had side tracked the debutant director Anusha Rizvi. Recently however in an interview to a business channel Aamir Khan explained that his first task was to tell the world that Peepli Live was Aamir Khan’s film.
He pointed out that promoting 3 Idiots was fairly simple for half the problem was solved by the fact that he and Raju Hirani --- director of the hit Munnabhai series were coming together in this film. This would naturally evoke the cine-goers’ interest.

Peepli Live neither has a well-known director nor any stars. Raghuvir Yadav is the only known actor. Unknown director and actors do not bring in the initial crowd. Filmmakers these days work towards getting that opening --- the first three days are crucial for filmmakers. There was a buzz that the film is about farmers’ suicide which I am sure did not help because farmers’ suicide is a depressing subject.

After extensively promoting the film, he changed tactics when he came close to the film’s release. When he came to promote the film on the reality show Indian Idol he was not alone he was accompanied by not only the director but also the cast.

When I watched Aamir promoting the film in this show two facts struck me; usually when films are promoted on reality shows you almost never see any scenes with dialogues of the film being promoted, what you see is a montage of some scenes with a song of the film playing in the background. It is also customary for the film to be promoted by the lead stars and you seldom see other actors during such promotions. In sharp contrast Aamir brought most of the cast, introduced each one of them and showed clippings of scenes which focused on each one of them. This was an intelligent move for these clippings not only evoked the viewer’s interest, but from these clippings one deduced that the film is more a critique on the media frenzy than about farmers’ suicide. In fact the makers had all along maintained that it was not about farmers’ suicide.

I think Aamir has very intelligently converted the so called initial ‘disadvantage’ of having a debutant director and unknown actors into an advantage ---- in fact he went on to highlight the fact that he lost out in the auditions to the actor who went on to play the protagonist. Such talk obviously creates a curiosity about the actor. After all isn’t advertising and marketing all about evoking curiosity and creating an interest in the product?
Posted by Shilpi Bose at 7:49 PM