The Photo Shoot I Will Always Remember

Twenty four years ago on 5th September Neerja Bhanot who was senior flight purser with Pan Am sacrificed her life to save the lives of several passengers in a hijacking incident, the news of which shook the nation. But why am I talking about this in an advertising blog? As many know Neerja worked as a model before joining Pan Am. She was seen in several advertisements such as Charmis Cream, Forhans Toothpaste, Krack Jack Biscuits, and many more. She also featured in a press ad campaign for a product whose marketing was my responsibility. Here is the story. 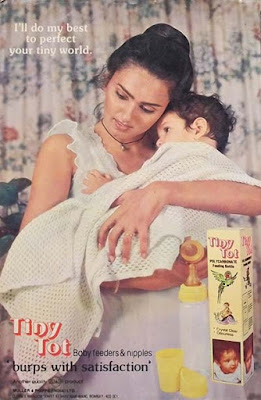 During the early 1980s I worked as a product manager with Muller & Phipps (India) Limited and was in charge of marketing and advertising a set of products, one of them was Tiny Tot polycarbonate feeding bottles and silicone nipples. My company had allocated a very small advertising budget for Tiny Tot; advertising for feeders and nipples was permitted those days. My task was to get the best results from this limited ad budget.


A small study indicated that when a mother visited a shop to purchase feeding bottles and nipples for her baby she compared different brands before deciding on one; the retailer too played an important role in influencing her decision. So the attractiveness of the outer package and the finish of the actual product were of utmost importance, especially for us because we had a very small budget for advertising. We appointed a freelance commercial artist to work on the design for the carton; we took our time to ensure that we had an attractive and design that would draw the attention of the target 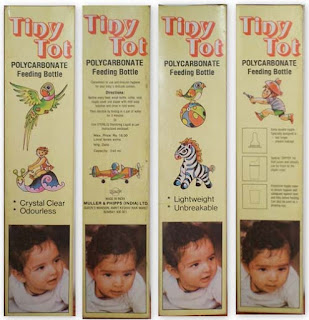 audience when placed on the retail shelf, what is interesting is that this carton won the National Award in Designing and Printing the following year. During the sales brief the sales force was advised to place at least four Tiny Tot cartons in a row on the retail shelves side by side in such a way that each carton revealed a different side, thus drawing attention. The design of the carton had attractive cartoon pictures and two photographs of a baby boy, each of the photographs were repeated on the opposite side of the carton. The baby’s name was Akshay if I remember correctly. We had decided to use the same baby for our press campaign; our ad agency had recommended using a popular model of that time to play the role of the mother of the baby.

One fine morning the agency sounded the alarm bell. They said that we must act fast and do the shoot without further delay because the baby was growing, if we wait any longer he would become unsuitable for the role, both the agency and us did not want to look for another baby at this stage. We immediately gave the agency our consent and asked them to make arrangements for the photo shoot immediately. The agency dropped the idea of using the popular model and instead opted for Neerja Bhanot for the mother’s role, we gave them our approval.

The photo shoot was held at the same flat where little Akshay lived; it was located somewhere in southern Bombay.  Akshay’s mother had told the agency that he would routinely wake up at around 3.00 every afternoon and that would be the right time to have the shoot. The agency representative, Neerja Bhanot, the makeup artist, the photographer with his crew and I reached the location at about 2.15 pm. It was a pretty spacious flat, we were shooting in the drawing room which was quite large; we decided on the exact spots where the photos were to be shot. Accordingly the photographer placed his equipment while the makeup artist helped Neerja with her makeup; all this happened while the baby had his afternoon nap. We were all ready for the shoot but little Akshay continued to sleep, he did not wake up at his usual time. The photographer became a worried man because it was autumn and sunlight would fade fast which would affect our outdoor shoot that was to take place in the compound garden after the indoor shoot. Minutes ticked away while we waited, we were totally helpless and we could do nothing but wait. But Akshay, our little star was not concerned; he slept soundly for a good two hours while we waited patiently. Finally the little star woke up, his mother brought him to the drawing room where we waited; he took a quick look at us and turned his face away. Some more time was spent in feeding the baby and getting him ready for the shoot. When Akshay was brought in for the shoot he was still a bit drowsy and was certainly not in a mood to shoot, it looked as though he would go back to sleep again. I took the responsibility of playing and doing some ‘masti’ with him to cheer him up because he did not seem to be in a good mood after seeing so many unknown people in his home, at last our little star was ready for the shoot.

Neerja was asked to hold the baby on her lap, while the photographer was doing his adjustments Akshay looked at the camera and this made for an interesting shot, but just at the moment the photographer was about to click Akshay simply turned his face away. This happened thrice and the photographer was not able to get his shot, to make matters worse Akshay just got fed up with what was happening and began to cry. His mother came to our recue and cheered him up again while time was running out. We were finally able to complete the indoor shoot, one photo had Neerja with the baby on her lap and the other had her holding the baby in her arms while standing; the second picture was used for the POP material (the poster has been reproduced above). After the indoor shoot the entire crew moved down to the building compound which had a small garden, I noticed that the light had faded quite a bit but the photographer was doing his best with the available light. I left the venue while the shooting was in progress. In a couple of days the photographs were ready and the agency sent us the layouts of the press ads and POP for our approval, as expected all the photographs of the outdoor shoot had to be rejected.

I happened to see Neerja again at a public place in suburban Bombay and that was the last time I saw her. After about three years from the time we did the photo shoot the world was shocked and horrified to learn about the hijacking of Pan Am, I called up my friend at the ad agency and he confirmed that Neerja was indeed no more; I was both sad and angry but helpless.

Neerja Bhanot will always be remembered for her heroic deed and the photo shoot with her is an incident I will never forget.
Posted by Aroop Bose at 7:02 PM