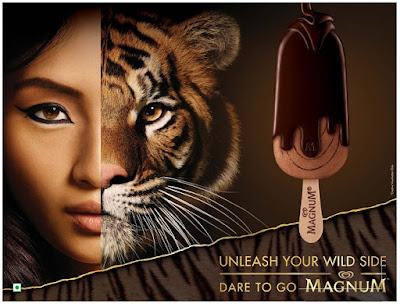 Magnum - Unleash Your Wild Side campaign was launched in India in the summer of 2017; it is actually a part of an international campaign. In a product category such as ice-creams it is very difficult to find a differentiator that can make the advertising proposition distinctive and provide a competitive edge for the marketer. Ice-cream brands have always been innovating by bringing in new flavours and presentations to stay ahead of competition; by presentation I mean making the product available in sticks, cups, cones, sandwiches, flavour combinations and so on. The theme of
the Magnum Ice-cream campaign, to my mind, is a bit unusual for an ice-cream brand. One would expect a theme like this to be associated with motor vehicles, batteries or any product category where power, movement or vitality plays important roles. Associating ice-cream which has a cooling effect to ‘wild side’ is an interesting idea, however the wild animals shown in the ad do not act wild; they are shown calmly walking alongside the models, this works fine with an ice-cream brand.

In the past children were considered the core consumers for ice-creams and ad campaigns were always associated with fun and taste, but now this seldom happens. As I said before ice-cream brands need to innovate all the time to differentiate from competitors, the problem with innovation in this category is that it does not remain unique for long; the features can easily be copied. In case Magnum, it has been copied by Amul and to make matters worse it sells at less than half the price, here I am referring to Amul Epic, there could be other similar me-too brands in the market. 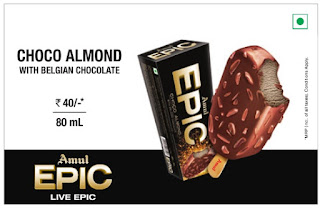 Magnum is essentially vanilla ice-cream encased in chocolate, it comes in three variants. The product concept is not exactly new; ‘choco-bar’ ice-creams which were exactly the same but without variants existed half a century ago. Magnum, I feel, is actually choco-bar reintroduced with variants and it tells a new story which would appeal to the modern, urban young adults. A lot of emphasis is given to ‘Belgian chocolate’, how many in India know about Belgian chocolate and how is it superior to regular chocolate I wonder, but it does create a curiosity in the minds of the consumer. With all the imagery and claims made in the voice-over the message is still about fun and taste but aimed at young adults. In the TV commercials the ‘plain’ old vanilla flavour is repositioned as something very special and chocolate is Belgian chocolate which is presented a superior chocolate variant through imagery; so in this way Magnum is differentiated from other ice-cream brands.

The message in the ad campaign is quite simply – Magnum ice-creams are superlatively tasty so go ahead and indulge or ‘Unleash Your Wild Side’.  The ‘wild side’ is depicted by wild animal in the ads which makes the ad both noticeable and memorable. The ad campaign very effectively creates an urge in the mind of the target consumer to try out the product. Although Magnum is expensive but that does not seem to be a deterrent because the campaign does create a strong desire to give it a try.
An interesting aspect of this campaign was a fashion show by Magnum and TheLabelLife.com in Mumbai last summer to create a buzz around the product. Using augmented reality wild animals were shown walking alongside models on the screen behind the ramp.

‘Unleash Your Wild Side’ campaign is about a year old, will this campaign continue with the same theme this summer too? We will have to wait and watch.
If you are unable to watch the embedded video below please click the link here to watch it on YouTube