Patanjali Ayurved Ltd. is the biggest success story in the Indian consumer products industry in recent times. No consumer products company, whether Indian or foreign, has grown so fast and has been able to market such a large number products in India in such a short time. The company was founded by Baba Ramdev and Acharya Balkrishna in the year 2006, it grew very rapidly and it claims to have posted sales of Rs. 5000 crore (approximately US$ 770 mn) in the financial year 2015-2016 which the company wanted to double in the following financial year; have they been able to achieve it? So far I do not know. It plans to increase its reach by having 4000 distributors, it wants to have over 10,000 company owned outlets and 100 Patanjali-branded stores and supermarkets. As reported in the media it has tied up with retail chains like Future Group and Reliance Retail for deeper penetration; it has plans to set up six new manufacturing facilities in different parts of India. Patanjali Ayurved claims to have 500 products in categories such as ayurvedic medicines, soaps and toiletries, herbal cosmetics, cooking oils, food, cleaning products and perhaps more; it also has sights on the clothing market and desires to launch its brand of jeans; the list keeps increasing. 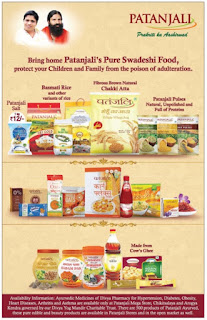 Patanjali’s way of running its business is rather unconventional; it has definitely done some things right to be where it is now. Since this is an advertising blog I would not like to go into details of how it has been marketing its products, I would restrict my comments and observations only to its advertising and communication. Patanjali Ayurved has been advertising its products heavily, while researching for this post I learnt that it spent Rs. 360 crore on advertising between November 2015 and March 2016 alone.


Appealing to the patriotism of the Indian people is the company’s communication strategy; it has brought back the concept of swadeshi which I thought was no longer important in today’s age of globalization. Swadeshi is about self-reliance and not being dependent on imported goods; swadeshi was important during India’s independence movement and for some years following the country’s independence. With globalization the scenario changed completely and swadeshi had become history till Patanjali brought it back and did so very successfully. In Patanjali ads swadeshi is supported by painting a negative picture of foreign multinational companies, it even compares them to The East India Company which is known to Indians for its notoriety, greed and foul play; let me quote from a Patanjali press ad that appeared on August 15, 2016, which was the Indian Independence Day: “Though we got political freedom 70 years back. Economic Freedom is still a dream. The way East India Company enslaved and looted us, Multi National Companies are still doing the same by selling Soap, Shampoo, Toothpaste, Cream, Powder and similar daily use items at exorbitant price. Thousand’s of crores of profit thus generated is ploughed back to their own countries. ” 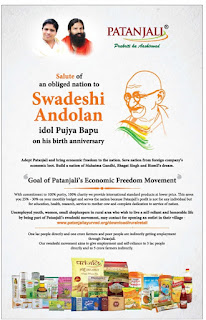 Patanjali regularly releases ads on the Indian Independence Day, 2nd October (Mahatma Gandhi’s birth anniversary), 23rd March (Martyrs’ Day) to emphasize the importance of swadeshi. So far I have only read the English ads of Patanjali and found the language quite different from other ads in the same product categories, small grammatical errors have also crept in, for example the copy quoted above says 'Thousand’'s instead of 'Thousands'. Though I may find the advertising copy a bit unconventional, the ads are hard hitting and seem to be working well. 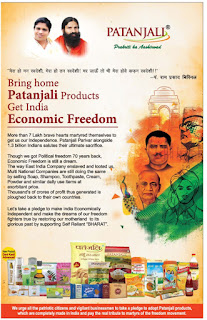 When not attacking multinational companies it casts aspersions on its other competitors; take for example in their mustard oil press ad, it boldly says, “Periodic tests conducted by government reveal that most mustard oil brands are adulterated”, while claiming Patanjali Kachi Ghani is 100% pure mustard oil. In their toilet soap press ad it is suggested that toilet soaps other than Patanjali’s are made from harmful chemicals. In Patanjali Kesh Kanti ad it warns consumers that the hair oil they use “…may contain cancer causing mineral oil!” Creating doubt and fear in the minds of consumers is a part of Patanjali’s communication strategy, whether the company is justified in making such claim is something I wouldn’t know. 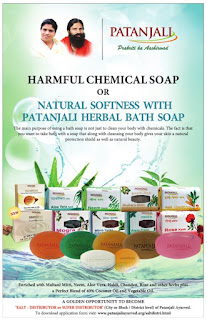 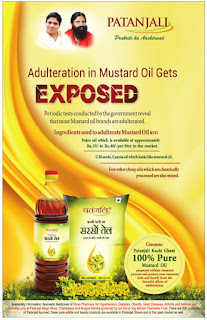 One interesting observation, in the ‘Martyr’s Day’ ad, it says “…East India Company started enslaving India…” it also mentions, “Along with foreign products, foreign culture, foreign language, foreign clothing, unhealthy food habits and obscenity were spread across the country by these foreign companies.” The foreign language which is being referred to here, according to me, has to be English, it can’t be any other language; so the thought which comes to my mind is that Patanjali itself releases ads in English language and it is also planning to market its own brand of jeans which is foreign style clothing, there seems to be a contradiction here. 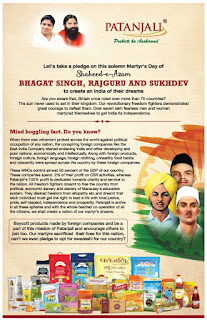 To summarize Patanjali press ads, more often than not, attempt to show multinational companies in poor light and in those categories where MNCs do not have a presence it tries to create doubts in the minds of the consumers with regards to the quality of the competitors’ products. Patanjali press ads very effectively emphasize the high quality and safety of its own products, to quote a portion of the body copy of one of its ads –“…100% pure and natural, low priced Patanjali”.  Baba Ramdev is the brand ambassador and probably the most effective and credible brand ambassador in Indian advertising so far; in one of its press ads Baba Ramdev cautions mothers of not being mislead by endorsements by brand ambassadors who endorse products only for the hefty fees they are paid but they are neither scientists nor specialists, such products should therefore be boycotted. The ads also say that profits the company (Patanjali Ayurved) makes is totally (100%) dedicated for welfare services and charity, unlike other companies who spend only 2% of their profits on CSR activities. Patanjali press ads are not ‘creative’ as we understand creativity in advertising; to my mind they are like power packed announcements which seem to hit the target. 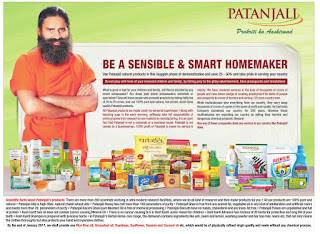 Patanjali Ayurved was pulled up by The Advertising Standards Council of India (ASCI) for making unsubstantiated claims, if you wish to know more please click 10 reasons why Patanjali ads got pulled up by ASCI yet again. A city court also imposed a fine on Patanjali Ayurved last year for “misbranding and misrepresentation of its products," if you wish to know more please click Patanjali slapped with Rs. 11 lakh fine by Haridwar court on charges of' 'misbranding'. I must also mention that Patanjali Ayurved is not the only company ASCI has pulled up, ASCI has been pulling up various companies (including MNCs), from time to time for misleading advertisements.
So much for Patanjali’s press ads, now let me move on to their TV commercials. Patanjali TV commercials are made very differently from its press ads; they talk about the goodness of Patanjali products like any TV commercial of other competing brands, although these ads lack the aggressiveness of its press ads and are relatively mellow but they are quite convincing. From what I have seen so far each of these ads gives consumers a good reason to use the products which makes them distinctive; Patanjali Noodles ad is an exception because it is like any instant noodle ad, the USP supposed to be is that Patanjali Noodles are made from whole wheat flour or atta, this is hardly a USP since Maggi was the first to introduce the atta noodle variant long ago. Embedded below is one of the TV commercials, you could view this as well as the others in Patanjali’s YouTube channel.

Patanjali’s style of advertising with Baba Ramdev as brand ambassador has been working well in tandem with the company’s other marketing efforts; it appears that the quality is by and large appreciated by consumers. Patanjali’s communication is pretty wholesome, the message is communicated has the right mix of the goodness of ayurved, use of natural ingredients in its products, absence of harmful chemicals – hence it is claimed that the products are safe; added to this is national pride (Swadeshi), pride in Indian traditions, lower prices and endorsement by Baba Ramdev; this has struck the right chord with consumers. I personally think the end effect of all its communication efforts has on consumers is the belief that this company (Patanjali Ayurved) strives to deliver quality and safety. After the success of Patanjali Ayurved it seems competitors have been reworking their strategies.

However, the question that arises is whether Patanjali Ayurved can carry on indefinitely with their current style of advertising. I do not think so; nothing can go on forever, in times to come effectiveness of these ads will gradually diminish, new players will come in, and existing players are bound to innovate.
Baba Ramdev’s brand ambassadorship might not be as effective as it is now, anything can happen in future, consumer fatigue can set in. I do not say Patajali Ayurved will perform badly, but I am sure that the growth rate will diminish. As the company grows things will get more and more complicated. Is Patanjali Ayurved geared up to face the challenges of the future? Will it be able to understand the pulse of the market in future? Well, time will tell. If Patanjali wishes to be in a dominant position in the FMCG market it will have to constantly innovate on its communication efforts and strategies with the changing times.


An update: Some time after I published the above post it was reported in the media that Patanjali Ayurved has recorded Rs. 10561 crore in revenue for the financial year 2016-’17, which is well above the company’s target. It has also been reported that it has set an ambitious target of Rs. 20000 crore for 2017-'18
Posted by Aroop Bose at 5:46 PM