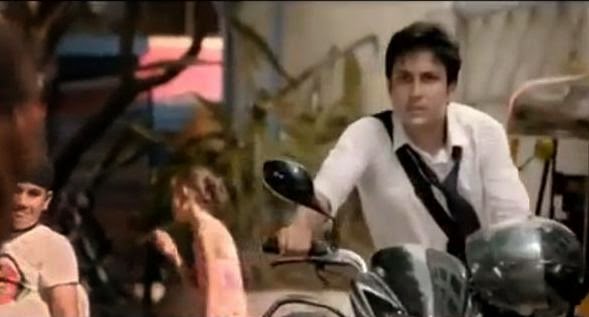 The Servo 4T – Pushpinder TV commercial has been on television for quite some time now. It shows a young man pushing his motorcycle and is being made fun of by everyone who sees him; he has even been given a nickname – Pushpinder, because he is always seen pushing his motorcycle. To my mind the approach taken for creating this campaign is very different from those of its competitors. The primary function of any lubricant is to reduce friction between moving parts, thus reduce wear and tear, and also prevent corrosion; this enables the machinery to work efficiently for a long time. The message communicated in all advertisements for lubricants is essentially this but the manner in which it is communicated differs from brand to brand. The Servo 4T – Pushpinder TV commercial also conveys essentially the same message but adds another aspect, that being, if a person were to use inferior lubricants, he would not only face hardship (pushing the bike) but also humiliation (people making fun), it further adds that Servo 4T keeps your bike in great shape by caring for the engine, clutch and gear.

If you were to examine lubricant ads, whether they are meant for scooters, motorcycles, cars or heavy vehicles, invariably the message communicated is, if the particular brand is used, you could be assured of certain advantages, which typically are – engine runs more efficiently and for a longer time, better mileage, engine is protected, smoother drive and such similar such claims. I would to call these manufacturers’ claims because these claims are not based on any unique consumer insights but are just facts about the product which the manufacturer would like his consumers to know. Nothing wrong with such ads but the Servo 4T – Pushpinder ad is very different, it is based on consumer insight which is about going through hardship and embarrassment if the right brand of oil is not used.  The ad warns you of the consequences if you do not use Servo 4T rather than saying what the others say. So it is ‘if you use our product’ for other brands versus ‘if you do not use our product’ for Servo 4T. Let me now briefly discuss the propositions made by different brands of oils/ lubricants in the last few years.

I have selected a few ads to illustrate my point.

To watch ad click here
This ad attempts to educate the consumer about the fact that you cannot use bike (motorcycle) oil in a scooter. Castrol Active Scooter is specially made for scooters; it keeps the engine as good as new. The ad is in response to the mistaken belief held by consumers that bike oil is okay for scooters too. This ad however just touches upon what can go wrong if bike oil is used in a scooter and nothing more.

To watch ad click here
In this ad the manufacturer tells the consumer that ‘actibonds’ present in the oil protect the engine. That is why the consumer should use Castrol Activ for his vehicle. The ad makes good use of animated graphics.

To watch ad click here
In this ad Elf Moto is been associated with winning against many obstacles. High quality animated graphics have been used to explain how the product is superior.

To watch ad click here
The focus of this ad is to show that HP Racer 4Stroke Engine Oil works better than others even in extreme heat.

Veedol Take Off 4T Plus

To watch ad click here
In this ad it has been claimed that the product keeps the engine stronger so you get more horse power, (superior) acceleration and ageless engine.

MAK Lubricants has always been associated with optimism – MAK makes it possible! The ads have been interesting and some of them quite humorous. Links to two ads are given below:
Bowler
School children

To summarize most ads for lubricants explain the advantages of using them which generally are about better performance and longer engine life, some ads support their claim by saying that they use high or new technology and good amount of high quality imagery is also used in the ads. One common element in all these ads is that they ask the consumer to use their respective products by giving reasons as to why their products are better, that is the only communication. Servo 4T – Pushpinder ad is different from others, it is perhaps the only ad which actually warns you about what can possibly happen if you use any other inferior lubricant – you could experience difficult and embarrassing consequences. At the same time it also explains how Servo 4T takes good care of the engine, clutch and gear. The proposition made in this ad is – Servo 4T keeps your bike in great shape and your reputation too.

While doing research for this post I learnt that lubricants produced by public sector oil companies in India are losing market share to foreign multinational brands; I hope this Pushpinder ad helps in pushing for higher market share for Indian Oil, the company that manufactures Servo 4T.
Posted by Aroop Bose at 6:23 PM