Looking Back by Shilpi Bose 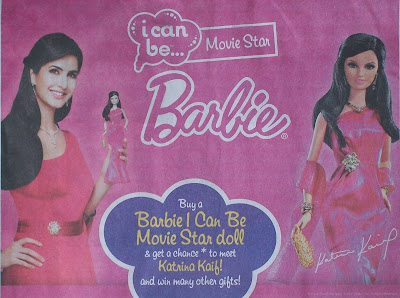 
Barbie doll's first ever commercial
While Barbie doll was launched way back in 1959 in U.S.A., for Indian children of the early nineties Barbie was a fairly unknown brand. The company and its agency Advertising Avenues set about introducing the brand in India. After the usual set of ads the agency hit upon the idea of featuring a live Barbie along with the doll in a television commercial. The Creative Director, Advertising Avenues told me that after a fruitless search for a tall, slim girl their eyes fell on their receptionist who happened to be tall – if memory serves me right I think she was 5 ft 10 inches --- and slim. She perfectly fit the role of Barbie. She was dressed up in a dress similar to the one worn by Barbie and she effortlessly slipped in to the role of Barbie. I wish the commercial was on YouTube it would be interesting to watch it after all these years.
To further create interest the agency and the company decided to hold drawing competitions for school girls and guess who gave away the prize, it was Barbie of course. This time it was an aspiring model and the excitement of the school girls at seeing her was to be seen to be believed.
Now it is none other than Katrina Kaif donning the role of Barbie, indeed Barbie has come a long way in India.
Posted by Shilpi Bose at 7:12 PM