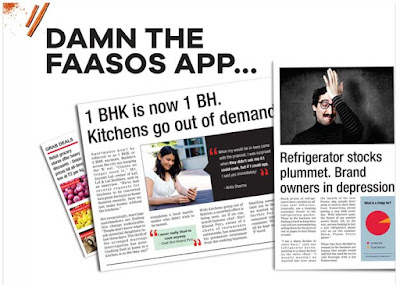 Faasos (earlier Faaso's) has been in the market for four or five years and has been expanding despite growing competition. The competition is just not from food brands in this category but also from other fast food or convenience food brands, both Indian and foreign, which are present in the market today; those being, various brands of pizzas, kabaab rolls, savouries, biriyanis and other such food items. Convenience food items of various kinds sold by local players, who do not have a presence in cities and towns other than where they are situated, also pose competition to Faasos; the convenience food market in India is becoming more and more competitive; the consumer today enjoys a lot of choice. 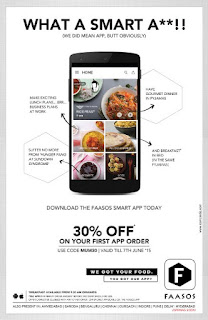 Earlier Faaso’s was present only in Pune and Mumbai (Bombay) but today it has spread its wings to various other Indian cities such as, Delhi, Hyderabad, Bangalore, Ahmedabad, Baroda, Chennai, Indore and Gurgaon. Recently Faasos launched a mobile app to further grow its business, as is the trend these days; to know more click here – ‘We are integrating WhatsApp ordering on our app’. The brand seems to be really going strong and one of the factors responsible for this is its advertising and other forms of communication with its target customers. I had posted an article on February 4, 2013 on Faaso's earlier advertising campaign in this blog; click here if you wish to refer to it. Since then and now I find that there have been quite a few changes in what and how Faasos has been communicating with its consumers, this has prompted me to write about Faasos once again.

The earlier Faaso’s advertisements (press advertisements and other print material) which were created by ICOMO Advertising I Pvt. Ltd. used to be eye catching and had light humour, the background used to be light yellow with a large visual which was the centre of attraction; the food items shown looked very inviting. The earlier ads were very attractive and though they did resemble other food ads to some extent, such as those of pizzas; despite this Faaso’s ads did have a certain distinctiveness.
The current ads are also created by the same advertising agency but look very different from the earlier ads. Firstly the brand name FAASO’S has been changed to FAASOS, the apostrophe has been dropped. The background is white with text in black making the copy matter stand out, the food pictures are smaller in size almost like thumbnails and there is no central food visual. Even though the visuals of the food items are small in size, they still look attractive against the white background. The focus of these ads is obviously the app which Faasos is trying to popularize and also the fact that they now offer breakfast, lunch, snacks and dinner and not just wraps. They have continued with the whacky humour in the copy; in the ad below which I saw in The Times of India recently says that because of the new Faasos app kitchen in a home has become redundant and therefore builders now no longer provide for a kitchen in homes they build. In the other visual in the same ad it says that refrigerator sales have plummeted because people prefer to order fresh food from Faasos using the app, so there is no need to store anything in the refrigerator.
Note: To see the above ad in Times of India epaper, click here and go to page 34. 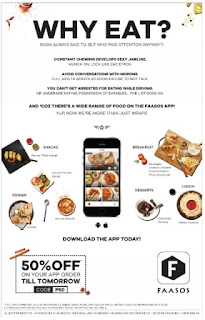 Faasos' target audience comprises busy young adults living in urban areas; using humour three messages, shown below, have been clearly communicated effectively to the TA in the current ad campaign:
While the above claims are clearly made in the copy, the white background of these ads gives a clean look; it conveys good quality and hygiene in a subtle way. I am not saying that the current ad campaign is an improvement over the earlier ad campaign; in the earlier campaign the yellow background helped in giving the ads a ‘yummy’ or tasty look, while the present ads have a clean and hygienic look. The overall look of the current ads is quite unique and does not see to resemble any other food ad that I know of.

Faasos has also posted two videos on their YouTube channel, these explain the usefulness of the app. I need not describe these videos because they are pretty self-explanatory. The videos are embedded below:

The fault in our food