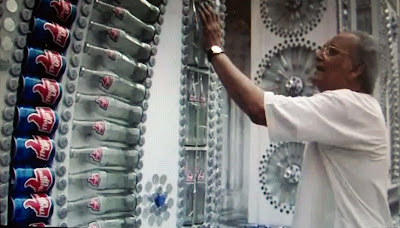 Advertising in India has indeed come a long way. It is no longer about an ad being created in English and sometimes in Hindi and then being translated into various regional languages. For many years now ads are specially created for the regional language audience and the best time to see some excellent ads is during the festivals.
The Thums Up commercial in Bengali telecast during Durga Puja – the most auspicious festival of the Bengalis – had a concept which immediately drew my attention. It takes the celebrity route; although I am not much of an advocate of celebrity endorsements, here the presence of Soumitro Chatterjee — the much revered, legendary actor of Bengali cinema --- in my opinion adds to the overall appeal of the commercial.
The concept of the commercial is inspired from the old and new traditions of the festival. The old tradition finds expression in the household Durga Pujas organized by the zamindars (landlords) and the very rich families of West Bengal. The festival provides the extended family with an opportunity to come together; it is however not just the family, the people in the neighbourhood too look forward to the Durga Puja.
The new tradition is all about themes. As opposed to the household Pujas, Pujas  funded by donations from the public are usually  theme based. 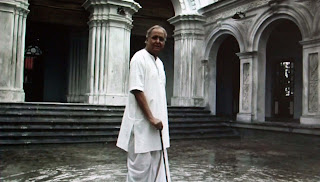 The commercial opens with a very well composed shot of Soumitro Chatterjee looking up at a stately mansion. The mansion is typical of the mansions belonging to zamindars (landlords); such mansions are scattered all over West Bengal.  Thanks to the shot composition he comes across as a forlorn figure, lonely, looking up in despair at his mansion; the lone figure of a faithful household help sitting in a corner, doing his household chores asks the patriarch (Soumitro Chatterjee) with a tinge of disappointment, “Are we not going to have a Puja this year?” Soumitro replies despairingly, “Who is there to organize the Puja”. This exchange between the two highlights a typical modern day problem of joint families breaking up which in a way signifies the gradual end of the traditional way of life.
The scene cuts to the news spreading like wild fire in the neighbourhood, both young and old are upset that there will be no Durga Puja at Dadu’s home; he is addressed as Dadu (Grandpa) by the people in the neighbourhood. A group of youngsters offer to organize the Puja; Grandpa agrees though not too enthusiastically. The younger generation obviously thinks of a theme and the theme is Thums Up. The chandeliers and almost everything is made with Thums Up bottles and cans. Grandpa is thrilled and he exclaims, “Ebar jombe moja”. Loosely translated it means “Now the fun begins”.
A cola by itself has no USP, frankly I doubt whether anyone can tell the difference between various brands of colas, therefore it is the ad which has to cut through the clutter and I think this ad does it quite effectively.
What is more the time tested tagline ‘Taste The Thunder’ is retained in the commercial.
Posted by Shilpi Bose at 7:50 PM