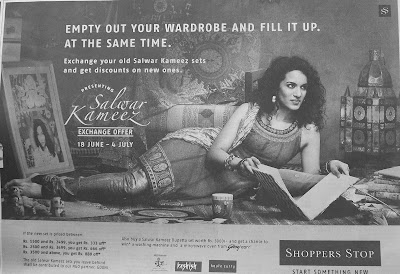 When the first black and white print campaign of Shoppers Stop broke in 1993, it immediately attracted my attention. It was so different from the other retail ads which were then prevalent in the media. These ads looked less like retail store ads and more like designer wear ads.

What struck me about the campaign was:
•    It was in black and white --- which until then was unthinkable for ads of retail stores.
•    The merchandise was not shown in the ads.
•    None of the ads showed the store.
•    The ads relied primarily on the body copy to convey the advertising message rather than on the visuals of the merchandise.
•    Significantly Shoppers Stop was being promoted as a product or brand rather than as a store. 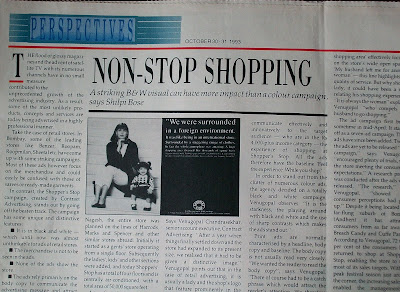 The campaign was so striking that it immediately prompted me do a story on it. It appeared in ‘Perspectives’ the advertising and marketing supplement of ‘The Metropolis on Saturday’ – a Times of India publication. When I met the senior account executive, Contract Advertising (the agency still handles the account), he noted that this was an effective way to stand out from the clutter of numerous colour ads. He said “It is the starkness; the playing around with black and white and use of sharp contrasts which makes the ad stand out.”
The campaign worked although the store was located in Andheri, a far flung suburb of Mumbai, it attracted customers from Breach Candy and Cuffe Parade—south Mumbai’s posh areas.

Although from a single store Shoppers Stop is now a chain of stores with a presence all over the country, it continues with its black and white print campaign. Recently the Andheri store was relaunched after a makeover and the relaunch was announced with a black and white print ad featuring Anoushka Shankar apparently attired in a high end designer wear. However as a consumer I felt something missing from the ad. I was eager to see the colours of Anoushka’s attire not just out of curiosity but to get a better idea of the product’s quality.

After 17 years isn’t it time for a change? I would love to see some colour in the Shoppers Stop ads. After all the world is in colour.
Posted by Shilpi Bose at 12:45 PM